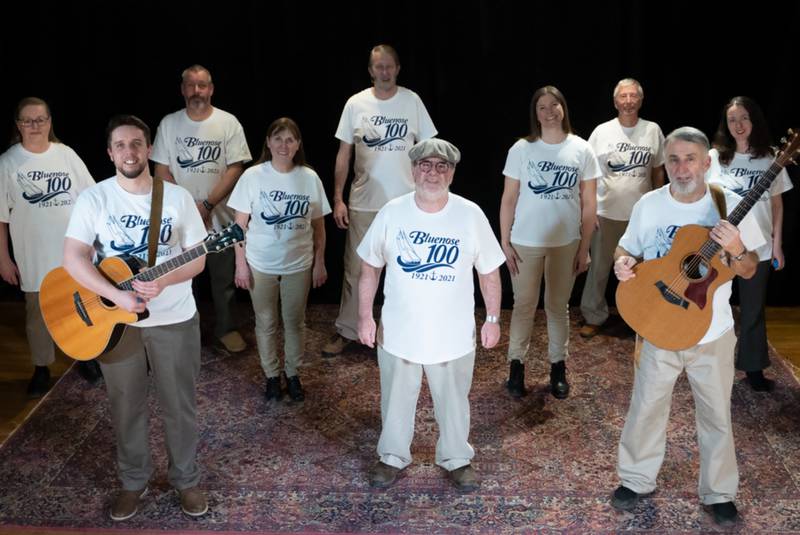 When the legend of the Bluenose was born upon the waves 100 years ago, it appeared as a ray of hope for Canadians and a symbol of ingenuity, craftsmanship and sailing skill that still fires imaginations to this day.

The schooner and its crew under Captain Angus Walters won its first International Fisherman’s Cup in October 1921, only months after its first fishing season on the Grand Banks. The series of dramatic races made international headlines at a time when Canadians were still mourning the loss of thousands of loved ones in the muddy battlefields of France and the devastated streets of Halifax, as well as from a virulent strain of influenza that was still taking its toll.

Bluenose: A good news story then and now

Now, one century later, a new pandemic requires that the Bluenose 100 centenary takes place online starting Friday at bluenose100.ca. But Joan Roue, great-granddaughter of the schooner’s designer William James Roue, says the Bluenose still serves the same purpose today as it did when it was christened by Audrey Smith for its launch at Lunenburg’s Smith & Rhuland shipyard on March 26, 1921.

“It was a good news story, during an era when people needed to latch on to something good,” says Roue, who is among many with a family connection to the Bluenose featured in the virtual celebration on Friday. “There was a spirit of patriotism attached to it; I still get goosebumps when I look at the old Canadian Heritage Moments that show footage of those races.

“The thrill and the pride that people felt, it was a good news story then, and it has continued for 100 years.”

Friday’s Bluenose 100 livestream begins at 10 a.m. with a look at the community and team spirit that built the schooner, the skill and hard work of those who raced it and fished from its dories, and how it became a Canadian icon that graces the dime and has been commemorated time and again in photographs, paintings, models, postage stamps and even the Nova Scotian license plate as one of the last great vessels of the Age of Sail.

Then on Friday evening at 7 p.m., a second program will examine the Bluenose’s contribution to culture, as in inspiration for songs and stories presented in excerpts from the stage musical 100 Years of Bluenose by the South Shore Players and a song circle featuring multi-talented folk musician J.P. Cormier, Canso songwriter Jim Hanlon, Juno Award-winning bluesman Morgan Davis and folk musician Miles Gallagher.

This may not be the celebration that Bluenose 100 committee chair Alan Creaser envisioned when planning for the event began in the fall of 2019, but like Captain Walters, the team has become adept at course correction over the past year and has created an impressive online port of call for all things Bluenose-related.

The website’s collection of photos, videos and an interactive map charting the schooner’s achievements is the next best thing to a trip to Lunenburg’s waterfront Fisheries Museum of the Atlantic.

“All this stuff is documented by video, a lot of it, so that’s important as far as having a legacy piece. We’ve had an opportunity to interview a lot of descendants of the original story, and get their story down,” says Creaser, who is also the former director of operations for the schooner’s own descendant, Bluenose II.

“It’s something we’ll have with us for generations to come.”

The program that goes live on Friday morning will share the Bluenose story from Roue’s unique design and its remarkable 96-day construction at Smith & Rhuland through its career on the fishing grounds and in championship races against Canadian and American competitors, before ending with its ultimate fate as a de-masted Caribbean freighter, broken apart upon a Haitian reef in 1946.

Along with Joan Roue, there will be interviews with the families of Smith & Rhuland, members of the Chronicle Herald’s Dennis family who sponsored some of its races, and Mi’kmaw elder Todd Labrador whose grandfather Joe Jeremy made the schooner’s mast hoops.

Further background is provided by Fisheries Museum of the Atlantic curator Adrian Morrison; historian Keith McLaren, a former Bluenose II crew member who chronicles the historic vessel’s racing history in A Race for Real Sailors; and longtime Bluenose history buff Allan Browne, who tracked down the names of the shipwrights who hewed the schooner’s timber, shaped its keel and hoisted the masts.

“These guys got stuff done! They formed a committee, hired an architect, got a captain and built this darn thing in a very quick time,” says Creaser of the team that brought the Bluenose to life.

“They built it outdoors in the winter months, they launched it and a couple of weeks later took it fishing on the Grand Banks off Newfoundland. And I’m going, ‘Man, if we could only do half of what these guys did.’ And what did they do it with? Nothing! That’s the part that I look back at and wonder who these people were.”

Story told in drama and song

Some of these stories will be told in song on Friday night in the excerpts from 100 Years of Bluenose, which will stream in its entirety at Bluenose100.ca starting May 22. The South Shore Players production was written by Hank Middleton, a retired history teacher and the son of a Cape Breton inshore fisherman living in Lunenburg, based in part on material from past shows like Bluenose on a Dime and a summer theatre show about Lunenburg’s history called Glimpses.

Middleton describes the production as a mix of historical narration, songs and comedy, recorded at the landmark Lunenburg Academy. The show includes moments of schooner lore from the driving of a gold spike into its keel by the Governor General, the Duke of Devonshire (who legend has it may have been three sheets to the wind) to Captain Walters’ obsessive relationship with the Bluenose and its reputation.

“There’s a section about how the Bluenose is tied to its home port of Lunenburg, but also how it’s in the hearts of people who live in Nova Scotia, Canada’s Ocean Playground,” says the playwright.

“Remember that last year, the Bluenose (II) sailed to all the ports around Nova Scotia and anchored offshore. The amazing thing is that even though it did not go up to a wharf, or any place where people could go on board, everybody came out to see the Bluenose, anchored way off in the distance.

“It is a major icon for Nova Scotians.”

Jim Hanlon recalls the strong feeling summoned by the sight of the Bluenose II when it visited Canso in 2020, and in Friday night’s program he performs his original song Wooden Ships and Iron Men.

Inspired by a conversation he once had with his father about the days when wind-driven ships like the original Bluenose filled Chedabucto Bay, the song includes the singer’s wish “that heaven holds this special bay, where hundreds like her sail each day/As in the days of wooden ships, the days of iron men.”

“When you get involved in the history of the Bluenose, the story is just magical,” says Hanlon from Canso, which is also the original home to the family of another Bluenose song composer, Stan Rogers.

“I got to interview some of the fishermen at the museum in Lunenburg who were actually on the Bluenose, and got stories about her catching fish and never being beaten in match races.

“There’s so many magical stories about her, you just can’t capture them all in one song.”

Hanlon also wrote the song Lunenburg’s Pride when he lived in the historic town, not far from where the Bluenose II docks, and even when he lived and worked in the Middle East, the legend of the schooner had made its way across the Atlantic to the Persian Gulf.

“I was in Bahrain, and I’d be out, and people would say, ‘You’re from Nova Scotia? You must be a Bluenoser!’

All Items
Thank you to our Sponsors