When the original Bluenose fishing schooner was designed and built in Nova Scotia – one hundred years ago – the methods, tools, materials and equipment were very different from those used for today’s fishing boats. This article will explore some of the major factors that shaped boatbuilding then and now.

When William Roué designed the Bluenose he would have used his naval architectural knowledge and tools of his time. Knowing what the intended use of the new schooner was to be, Roué would have first developed a scaled lines plan of the hull using long, flexible battens for drawing fair lines, and ship’s curves: sets of gently curved wooden shapes used for drawing the tighter fair curves of the vessel. Fair lines and curves are the smooth, flowing lines that create the streamlined shape of the vessel.  This process would have taken some time as the profile, plan and sectional lines of the hull all have to be fair and compare exactly with each other. 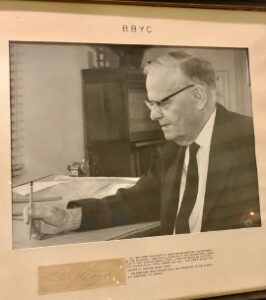 William Roué at his drawing table

Many designers and boatbuilders of this era built a scaled half-model of the new hull in wood to visually check the hull form, and which was used for making full-size patterns of the hull sections. 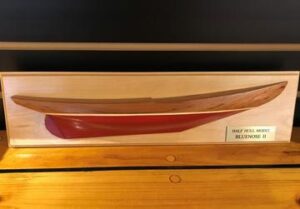 Half hull of Bluenose II by James Rhodenizer

Today, the process of generating and fairing a new hull design is done by computer, using input of the main parameters that define hull shape and form. Computer files can then be generated to control machines to cut the main structure of the vessel like the frames and transverse bulkheads – particularly for steel and aluminum boats. 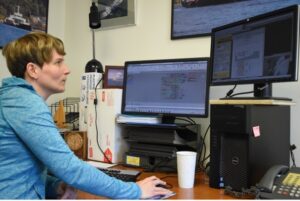 Once the hull lines have been developed, the other drawings that the boatbuilder will need can begin: hull structure, sail plan, general arrangement of spaces below deck, and systems such as steering gear, machinery and so on. This process would have been the same for Roué as for today’s naval architects – except today the drawings are mostly generated by computer, using input from design engineers.

Back in the 1920s there were far fewer Canadian or international rules and regulations for the commercial fishing boat designer and builder – compared to now. Even so, safety was still the main concern of designers and boatbuilders, as it is now. Today, the main regulatory body in Canada is Transport Canada.

The biggest change in boatbuilding between the 1920s and now is in construction materials. Back then, wood was almost exclusively used for Nova Scotia-built coastal fishing vessels – and remained so for several decades more. Nowadays, most coastal fishing boats are built of fibreglass, although a few are built in steel or aluminum. Wood boat construction required – and still requires – special knowledge, tools, skills, workshops, mills – and the whole boatbuilding industry was geared up to supply and support wood boatbuilding in the 1920s.

Construction of Bluenose started with the laying of the keel -the backbone of the vessel. The event often involved a public ceremony – sometimes including the embedding of a coin in the keel for good luck. With today’s predominantly fibreglass fishing boats, this is not the case.

After the laying of the keel, the wooden frames – or “ribs” – of Bluenose would have been cut, and assembled at intervals along the keel. This was followed by planking the hull – which would have entailed steaming some planks to allow them to bend around the more shapely bow and stern areas. Steaming wood planks or ribs is another skill that is no longer seen in the workshops of today’s commercial fishing boats. 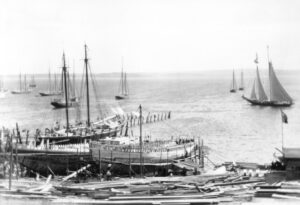 Bluenose under construction at Smith and Rhuland shipyard

Once hull planking had been completed, the deck would be installed, then the topside structure. These processes required boatbuilders skilled in caulking – a process used to ensure the gaps between successive boards were watertight. Again, this is a skill not seen, or necessary, in today’s fibreglass boat shops. 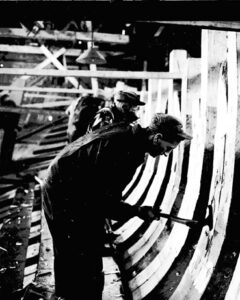 By comparison, today’s fibreglass fishing boat hulls are formed in a mould through a process called “laying up” of layers of fibreglass cloth or mat. The skills and knowledge required to do this are very different from what the boatbuilders at Smith and Rhuland needed when building Bluenose in 1920/21.

The fibreglass cloth or mat is laid into the mould and “wetted out” with polyester or other resin, which then sets hard when fully cured. The hull is then removed from the mould, ready for fitting the internal structure such as bulkheads, deck beams, decking, wheelhouse and cuddy. 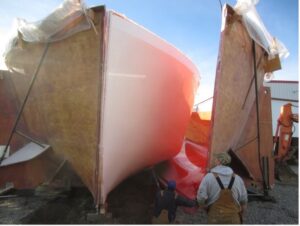 Hull being removed from mould 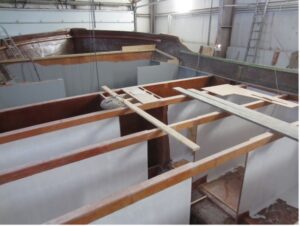 Bluenose was launched down an inclined ramp into the water – the traditional way of launching large boats and ships – and carried out with great fanfare and celebration. 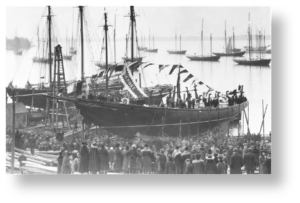 Bluenose being launched on 26th March, 1921 in Lunenburg, Nova Scotia

A successful launch required careful calculations to ensure the vessel floated off the cradle safely. At this stage, there still remained much work to do on the schooner even though she was afloat. The two masts had to be stepped and rigged, and furnishings, accommodations, deck machinery and fittings all had to be installed – and the boat made ready for sea trials. 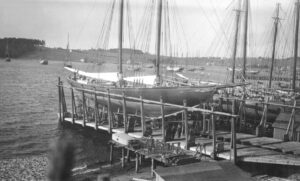 Today’s fishing boats are launched with a bit less ceremony via a trailer backed into the water, or via a marine Travel Lift as in the photo below. Like with Bluenose, there’s usually some final outfit and system tests to be completed before sea trials, and before the boat can be put to work on the fishing grounds. 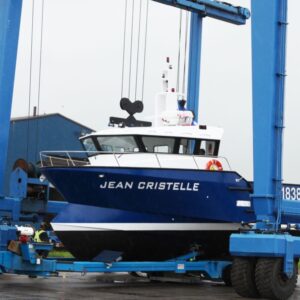 Ready for launching from a marine Travel lift 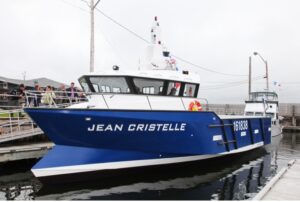 Newly-launched and ready for fishing

We’ve compared the process of design and construction of the original Bluenose with modern day coastal fishing boats that are also designed and built in Nova Scotia. So . . . was there more art involved in the 1920s than now? Is today’s boat design and building more of a science?

The modern-day commercial fishing boat is full of complex systems that require specialists to install and maintain them. However, properly balancing and rigging a big schooner is also complex. Knowing which type of composite and resin to use on today’s fibreglass hulls requires understanding of their physical and chemical properties. The same is true for wooden boats like Bluenose, and the choice of wood was made depending on its structural importance, exposure to weather and, of course, availability.

I contend there was probably as much science used in the original Bluenose as in today’s fishing boats – but the science was learned in a more informal way: from living and working with boats over time, rather than sitting in classrooms or taking online courses as is the case today.

In any case, boatbuilding remains a key industry in Nova Scotia with many boatbuilding and marine repair companies supporting the commercial fishery as well as other segments of the marine industry. You can learn more about some of these companies through the Nova Scotia Boatbuilders Association at https://nsboats.com/

All Items
Thank you to our Sponsors